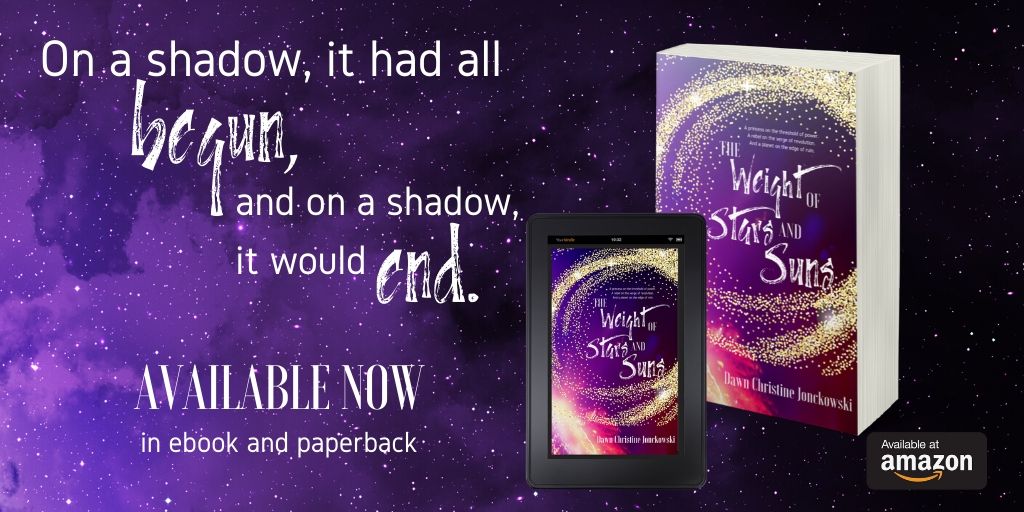 One hundred years ago, the spaceship Genesis crashed on a planet ringed with thirty-six suns.
And all hell broke loose.

Now the descendants of the marooned humans live enslaved to the natives. As the humans plan their latest rebellion, the suns of Tav begin to extinguish one by one. The ecological and political turmoil is Tavarian princess Dameia's chance to prove herself worthy of becoming the next Chieftain. When her well-ordered path collides with the humans' rebel leader Hyam, the unlikely allies find themselves reconsidering ingrained prejudices in order to protect the future of the planet and everyone on it.

Tav is facing imminent ruin. Hyam is caught between the freedom of his people and the princess he has come to love; Dameia battles the demands of her birthright and its condemnation of the human who has become her world.

Because if they each save their people, they cannot save each other.
Order Your Copy

Praise for The Weight of Stars and Suns

​"It's not often that a book comes along and lodges itself so firmly in your heart and soul, but this book does. Jonckowski's writing has a lyricism, a musical beat, and a romantic inhale that moves through you and speaks to you."
~ Shannon A. Hiner, author of The Immortal World series

"The Weight of Stars and Suns is a well-written book that keeps you on a balanced ride of go-with-the-flow enjoyment and heart-in-your-throat tension. Light and darkness."
~ Sarah Joy Green-Hart, author of Tree of Life

"A simple, yet rich world and history with characters that kept me riveted, compelled to find out what would happen to them. Jonckowski's narrative voice and writing style are both impeccable."
~ Sean Frazier, author of The Forgotten Years series